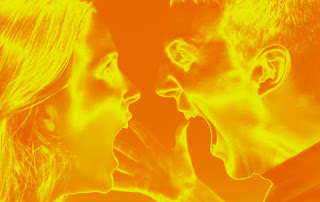 People are more divided than ever.  Never mind my thoughts on who is responsible for the current extreme racial divide (it's not the police, FYI), or the extreme social and political divisions in this country and in this world (dare I throw in religious persecution as well?), few would argue at how divided we've become.  Perhaps more would debate on whether or not intolerance plays a role, but irregardless, there is a mentality today that suggests everyone has a right to be offended by anything and everything and everyone who disagrees with them or merely voted for "the other party" even.

Last time I checked, nowhere in the charters of freedom does it identify the right to be offended.  Considering the history of the founding documents in America, which trace their origins to the Mayflower compact (the Pilgrims) which traces itself back to the Puritan (Christian) church, which traces back into the pages of the Bible, I would argue that it is just the opposite in fact:  NO ONE has the right to take such public offense over much of anything, and yet here we are.  Intolerance, Offendedness, and just downright hatred are becoming societal norms these days.  And sadly, these play out all too frequently on the most anonymous and cowardly of places:  social media.

Take last week's "Lifetime Achievement Award" speech by actress Meryl Streep, as a good example.  The election of the next U.S. President was over two months ago, but she chose the opportunity to attack the President-elect, rather than simply be grateful for living in a land where she can receive such an honor.  She did so by raising up clearly disputed claims about Mr. Trump (let me state that I was a fan of neither of the two remaining candidates, FWIW).  She did so by (whether intentional or not) insulting half the country who actually think that NFL football or MMA fighting are enjoyable sports to watch.  There's a lot of that going around these days, as just a few months back, a fourth of the country (part of the half that disagrees with a Democrat party liberal worldview) were tagged as "deplorables" who were "irredeemable."  And this is to say nothing of how the other candidate managed to offend just about everyone at some point with his rancorous statements.  Now in my mind and the Christian worldview, it is that level of animosity, hatred, and rhetoric that is truly deplorable.  And in regard to Ms. Streep's speech, when a high school classmate (among many others) posted on social media about how "inspiring" it was, I respectfully and politely said that we would have to agree to disagree.    I was then informed that that's how she felt, and was immediately dropped from her social media account.  Unfortunately I cannot post a transcript of the exchange to demonstrate what I thought to be polite and respectful since I can no longer access it.  But that does not matter.  What it demonstrated again is that there are many (Ms. Streep included) who live in such an insular bubble that they simply cannot handle any opinion or position different from theirs.  I've had many folks disagree with me on statements I've made through my own social media accounts, and though they post such disagreements publicly on my pages, I do not delete them nor do I censor their comments.

Now specifically I'm targeting a more progressive perspective here, because from my vantage, this intolerance seems to happen far more from the left side of the socio-political spectrum than the right.   8 years ago, there were many who saw then president-elect Barack Obama as flawed, inexperienced, and with a hyper-progressive, destructive agenda for the country.  There was anger over his election.  Yes, there were even a handful of those who resorted to name calling and insult.  But generally, the election was over, and it was time for most of those unhappy with the result to see what would actually happen next.  Fast forward to today, and the animosity and vitriol toward the more orthodox position is magnified 100-fold with chants of "not my president," Hollywood segments threatening to go on strike until Trump resigns, numerous unfulfilled promises by some to move to Canada if Trump was elected, rioting, hysteria, the need for therapy rooms, cry rooms, therapy puppies, coloring therapy, vows to fight him at every turn, public calls for his assassination, and so on.

In fact, it's safe to say that we've gone from downright intolerance to absolute hatred being expressed in the aftermath of the most unappealing election choices we've ever had in my lifetime.

If Hillary Clinton was right (and she was right, despite the "play" on Donald Trump's name) with her campaign slogan "Love Trumps Hate,"  Why then is there so much hate coming from those who supported her?  This hate crime out of Chicago is made more egregious in that they showed their extreme cowardice in attacking a man who, with special needs, likely couldn't or wouldn't resist them.  It was Jesus who said: "But I tell you who hear me: Love your enemies, do good to those who hate you, bless those who curse you, pray for those who mistreat you."  Seems when it comes to the intolerance of those who claim to be tolerant, His words need to be spoken again and again, and we need to heed them and be reminded of them constantly in this divided and intolerant age.

Sure.  Maintain conviction in your beliefs, assuming it's not just from a blind, uninformed position.  But to all of you on either side of the political spectrum:  Give up your hatred and intolerance now.  Do it, before it causes you to self-destruct.  To all you Christians out there:  don't give in to this hatred and intolerance.  And Pray.  Pray for this country and the new spiritual awakening and revival that is needed.
Posted by Coach-Rev at 10:31 AM

"Here in the 21st century,congregations often look more like country clubs than the one holy catholic and apostolic church. Issues from the Old Testament are alive and well even today, namely that affluence breeds complacency and apathy. Therefore these are reflections on a renewed call to discipleship and Mission, along with other random reflections on absolute truth and the universe as a whole."